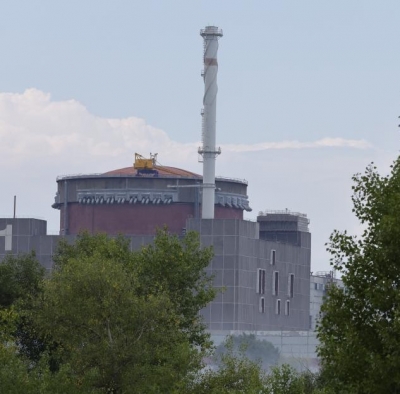 Berlin, August 22 German, French, British and American leaders have called on warring parties to exercise restraint around Ukraine’s beleaguered Zaporizhzhya nuclear power plant and for UN inspectors to have immediate access to the sprawling site.

The Zaporizhzhya plant, located in the city of Enerhodar in southern Ukraine, was seized by Russia in early March. Fighting has intensified at the compound in recent weeks, prompting ominous warnings from world powers of a potentially catastrophic escalation.

They agreed on “the need to avoid military operations near the plant” and that nuclear experts from the International Atomic Energy Agency (IAEA) inspect the installation in order to help ensure his safety and security, according to a statement from the White House.

In Germany, Scholz’s spokesman said they agreed “that support for Ukraine in its defense against Russian aggression will continue in a sustainable manner.”

kyiv says Russian troops are using the plant as a shield from which to fire at locations on the opposite bank of the Dnipro Reservoir, as it knows Ukrainian forces will be reluctant to fire at the sensitive site.

The Kremlin and its local representative claim that it is the Ukrainian “terrorists” who are shooting. Russia says Ukraine is bombing the plant using drones, heavy artillery and rocket launchers. In most cases, the Russian air defense intercepts the projectiles, he says.

Nevertheless, some infrastructure has already been affected, although so far critical safety and control systems have not been damaged. No increase in radioactivity has been recorded so far.

Russia has rejected international calls to withdraw its troops from the site, but said it would allow IAEA experts to assess the plant.

Still, a number of disagreements between Moscow and Kyiv over details, including what a travel itinerary for IAEA inspectors might look like, have slowed the mission.

Former world heavyweight boxing champion Wladimir Klitschko, the younger brother of Kyiv mayor and former superstar boxer Vitali Klitschko, said it was unclear how Ukrainian operating personnel still working inside of the factory was holding up.

“The world needs to understand if (Zaporizhzhya) is going to explode, there will be Fukushima and Chernobyl many times over,” he told Britain’s Times Radio on Sunday.

He said the plant and the nuclear specialists working there were being held hostage by Moscow.

Elsewhere, the Ukrainian General Staff said late on Sunday that it had pushed back Russian advances in the eastern Donetsk region towards the towns of Sloviansk, Kramatorsk and Avdiivka.

A lawmaker in the mostly Russian-occupied southern region of Kherson reported that Ukrainian forces managed to destroy a Russian ammunition dump during a counteroffensive over the weekend.

On Sunday, day 179 of the war, the Russian side said its own air defenses repelled several Ukrainian attacks over the weekend.

This included the Black Sea peninsula of Crimea, which was annexed by Russia in 2014, according to Russian authorities.

The air defenses had intercepted “objects” approaching the Russian military airfield in Belbek near Sevastopol, the head of the administration of the main port city, Mikhail Razvoshev, wrote on Telegram on Sunday evening.

Earlier Saturday, there had been an explosion in Sevastopol. Russian reports said a drone had targeted the headquarters of the Black Sea Fleet, but there were no casualties.

In Crimea, which belongs to Ukraine under international law, there have recently been repeated explosions, including at an ammunition depot.

kyiv welcomes the attacks, but has not directly accepted responsibility.

Disclaimer: This post was auto-published from an agency feed without any text editing and has not been reviewed by an editor