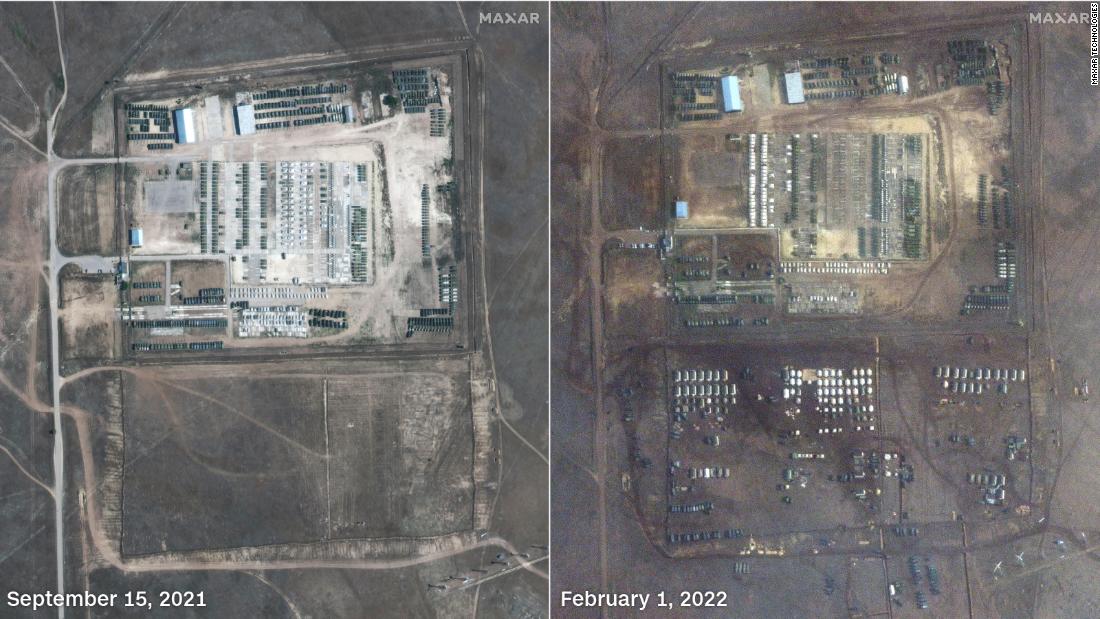 Russian forces have entered Belarus in the past two weeks. The Russian and Belarusian defense ministries say the deployments come ahead of a major training exercise this month.

The images were collected and analyzed by Maxar. In an accompanying note, Maxar said the deployments “reflect an increased level of activity and readiness.”

Maxar and other satellite imagery providers said they have noticed the expansion of existing Russian military training grounds and garrisons about 150 miles from the Ukrainian border in recent months.

Some are a few kilometers from the border.

Maxar said the most recent images show a new phase of Russian activity.

He said that previously, “in most cases, few troops or new accommodations for additional personnel were observed near deployments, suggesting that some of the units may have been prepositioned or forward deployed. “.

It started to change.

“Over the past two weeks, several new major military deployments have been observed in Belarus,” Maxar said.

“Furthermore, troop tents/shelters were seen at virtually all deployment sites in Belarus, Crimea and western Russia, suggesting that units are now accompanied by troops and have increased their overall level of readiness.”

Maxar compared footage from September and late January of the same military camp at Novoozerne in Crimea. Images show a significant increase in activity, with a tent area being erected.

This implies that the camp is ready to receive troops, although there is no evidence that troops are arriving yet.

Maxar also notes that “local military training activity (including live-fire artillery and maneuver training) was observed in progress at many training areas.”

Konrad Muzyka, a defense analyst specializing in Russia and Belarus at Rochan Consulting, an aerospace and defense consultancy, said he believed there were now between 74 and 76 Russian Battalion Tactical Groups (BTGs). ) distributed around Ukraine.

Muzyka says that since the first week of January, Russia has moved its forces from the Eastern Military District – thousands of miles away in Siberia – to Western Russia and Belarus.

“The size of this deployment is significant, possibly up to 15-20 BTG,” Muzyka wrote in a note.

He also said Russian ground forces have deployed units including Iskander short-range ballistic missiles in Belarus and parts of Russia near Ukraine. He calculates that there are at least 48 launchers near Ukraine.

While Russian capabilities and movements can often be observed, Kremlin intentions are much harder to read. US President Joe Biden said last week that an invasion of Ukraine in February was “a real possibility”.

“There is a real threat of invasion, but we don’t know what will happen,” she told the BBC on January 30.

The Kremlin has always denied that it intends to invade Ukraine.