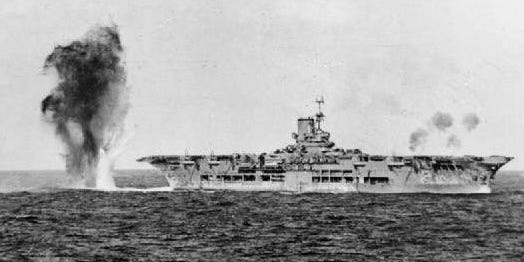 In December, as the British Royal Navy destroyer HMS Dragon steamed through the Mediterranean, her crew paused for a moment of silence to pay their respects to the aircraft carrier HMS Ark Royal, a British fleet aircraft carrier sunk by a German submarine during World War II. Second war.

The ceremony, performed a month after the 80th anniversary of the sinking of the Ark Royal on November 14, 1941, included Dragon’s Commander, Cmdr. George Storton, throwing a wreath in the water to remember the carrier, which is respected as one of the Royal Navy’s most legendary ships.

Although in service for just over two years, the Ark Royal – named after the flagship of the fleet that defeated the Spanish Armada in 1588 – played a central role in some of the most important actions of the early years of the war.

Launched in September 1935, launched in April 1937 and commissioned in December 1938, HMS Ark Royal represented a modern approach to aircraft carrier design at the time.

It was Britain’s first purpose-built aircraft carrier. Apart from HMS Hermes, which was roughly half the displacement of Ark Royal, the former Royal Navy aircraft carriers had all been converted from other ships.

It was the first aircraft carrier in which the hangers and flight deck were an integral part of the ship’s hull – rather than added to the hull after it was built – and the flight deck was equipped with catapults and arrester cables for launching and recovering aircraft.

The carrier was designed to carry up to 70 aircraft, but during its construction, the biplanes used on carriers began to be replaced by larger and heavier aircraft. At the start of the Second World War, Ark Royal’s air wing numbered between 50 and 60 aircraft.

Ark Royal’s first task during the war was to hunt German U-boats in the Atlantic as part of “hunter-killer” groups.

On September 14, 1939, the German submarine U-39 unsuccessfully attacked the aircraft carrier and was then attacked by the destroyers accompanying the Ark Royal. It became the first U-boat killed in the war.

Ark Royal was also involved in the hunt for the imposing German “pocket battleship” Admiral Graf Spee in December 1939. After cornering Graf Spee in Montevideo, the British spread a rumor that the carrier was on places. There were still a few days left, but the German captain was convinced the British had superior strength and scuttled Graf Spee, giving the British a much needed victory.

In the spring of 1940, the carrier helped support the Norwegian campaign, which failed to stop the German invasion there. That summer, Ark Royal deployed to the Mediterranean as part of Force H, and its air wing joined the attack on French warships at Mers-el-Kébir to prevent their capture by the Axis. .

The carrier proved essential in protecting several supply convoys to Malta. It also participated in the failed Vichy-held attack on Dakar and fought in the inconclusive Battle of Cape Spartivento, where it was attacked by Italian aircraft.

Ark Royal’s best-known action occurred in the Atlantic in mid-1941, when it helped track down and sink the dreaded German battleship Bismarck.

As the Bismarck and the cruiser Prinz Eugen set out on a commerce raiding mission in May 1941, the Royal Navy battlecruiser HMS Hood and the battleship HMS Prince of Wales attempted to intercept them in the Denmark Strait.

The encounter was a disaster for the British, who lost Hood, then the pride of the Royal Navy, and all but three of his crew of 1,418 men. Prince of Wales was also heavily damaged.

Shocked and enraged by the loss of Hood, Prime Minister Winston Churchill ordered all Royal Navy capital ships in the area to hunt down the Bismarck.

Ark Royal and the other ships of Force H steamed north from Gibraltar and found Bismarck as he sailed for France on 26 May. The Ark Royal quickly launched 15 Swordfish torpedo bombers carrying new torpedoes with magnetic detonators.

After mistaking the British cruiser HMS Sheffield for Bismarck and attacking her – fortunately the magnetic detonators failed – Swordfish returned and rearmed with torpedoes which had more reliable contact detonators. They left and attacked Bismarck just before sunset.

With Bismarck unable to escape, the British warships arrived the next morning and rammed the battleship relentlessly. The Germans attempted to scuttle her and a British heavy cruiser finished her off with torpedoes. Only 115 of Bismarck’s 2,221 crew survived.

Ark Royal repeatedly embarrassed the Germans by refuting their claims about the sinking of the carrier. But in November 1941, his luck finally changed.

On the afternoon of 13 November, as Ark Royal was returning to Gibraltar from a convoy mission to Malta, the German submarine U-81 successfully attacked the carrier. A single torpedo struck her starboard side, ripping a hole 130 feet by 30 feet well below the waterline.

Within 20 minutes, the ship had posted 18 degrees. Aware of the rapidity with which the carriers HMS Courageous and HMS Glorious had sunk and of the heavy losses – 518 and 1,207 men, respectively – the commanding officer of the Ark Royal, Captain Loben Maund, ordered the crew to abandon ship.

Most of the crew boarded the destroyers escorting Ark Royal, while damage control teams made an hour-long effort to save the carrier.

Their work and an attempt to tow the carrier back to Gibraltar ultimately proved unsuccessful. Just after 6 a.m. on November 14, the carrier capsized and broke in two before sinking.

Amazingly, only one of the Ark Royal’s 1,749 crew, Able Seaman Edward Mitchell, was killed.

In 2002, almost 61 years after she sank, divers hired by the BBC found the wreck of the Ark Royal in 3,500 feet of water about 30 miles east of Gibraltar.