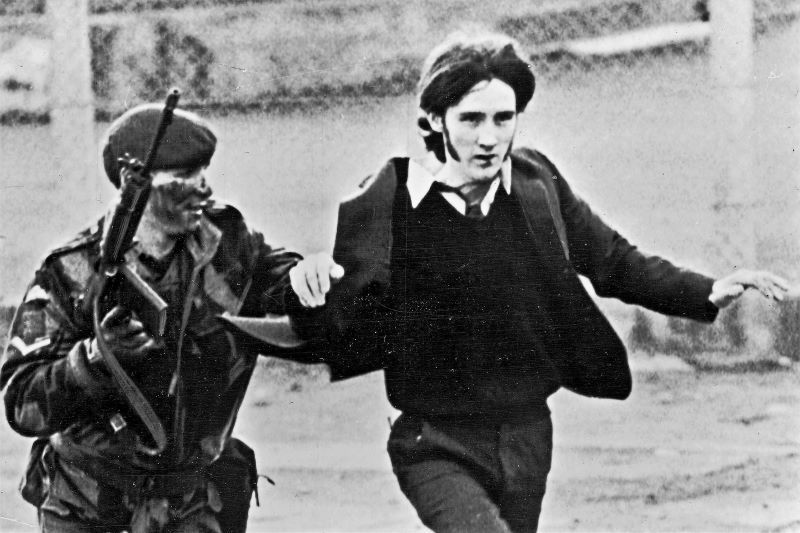 The 50th anniversary of Bloody Sunday is this Sunday, January 30.

On this day in 1972, British soldiers shot dead 26 unarmed civilians in Derry, Northern Ireland, during a protest march against internment without trial organized by the Northern Ireland Civil Rights Association (NICRA).

13 people were killed in Derry that day by British forces. They were:

Another person, John Johnston, 59, died later on June 16, 1972. His death was attributed to injuries he sustained in Derry on January 30.

Two days after the events of January 30, the Widgery Inquiry was launched by the British Parliament. Produced in ten weeks and published in eleven weeks, The report ultimately supported the British Army’s account of the day’s events.

Further, the report found, “Shooting by soldiers from 1 PARA on Bloody Sunday resulted in the death of 13 people and injuries to a similar number, none of whom posed a threat of death or serious injury.”

Following the Saville Report, the Police Service of Northern Ireland opened a murder investigation. In 2019, police announced there was enough evidence to prosecute “Soldier F” for the murders of James Wray and William McKinney, as well as five attempted murders.

In September 2020, the Public Prosecution Service of Northern Ireland (PPS) ruled that there would be no charges against other Bloody Sunday soldiers.

In July 2021, the public prosecutor announcement that Private F would not be tried because there was no longer any reasonable prospect of a conviction. Shortly after, Colum Eastwood, MP for Foyle and leader of the SDLP, appointed Private F to the House of Commons. Eastwood said: “He has enjoyed anonymity for 50 years. The British government wants to grant him amnesty now. This cannot be allowed.”

In the same month, the Northern Ireland Secretary of State, Brandon Lewis, presented a document which, in part, proposed a statute of limitations applying equally to all incidents relating to the Troubles.

50 years after Bloody Sunday, we want to know, do you think British forces should be prosecuted for the events of January 30, 1972?

Create your own user survey