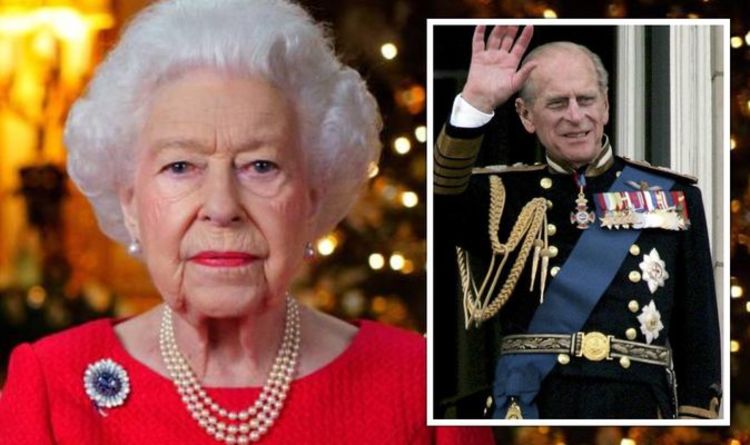 Majesty magazine editor Ingrid Seward spotted a ‘moving’ tribute to Prince Philip during the Queen’s Christmas speech after noticing she had changed the way she wore her brooch. While many avid royal watchers have noted that the brooch is often worn at key events in the monarch’s life, Ms Seward said the Queen usually wears it on her left side, not her right. The royal editor explained that the move was a nod to Prince Philip’s military career, as medals worn by surviving family members of deceased servicemen are worn on the right, according to etiquette.

She said on the show: “The spit is on the other side, now I was wrong because I thought the spit could hurt her back…

“Because when someone has passed away and you have ties to the military, they change the side of the medals, so she changed the side of her brooch.”

“Which was another very touching tribute as well.”

The sapphire and chrysanthemum brooch was often worn for royal photographs and the Queen wore the jewel during her honeymoon and birthday photos with Prince Philip.

The brooch has been in the Queen’s collection for decades, and the piece predates her wedding.

The Queen received the brooch in 1946 when she launched an oil tanker named “The British Princess”.

Eddie LeVian, CEO of American jewelry house Le Vian, told Express.co.uk about the brooch and said: “The Queen’s sapphire and diamond chrysanthemum brooch is one of the Queen’s favorites.

“Deep blue sapphires form the center of the flower and diamonds represent the petals.

“This year, above all, I understand why.

“But for me, in the months since the death of my beloved Philip, I have taken great comfort in the warmth and affection of the many tributes to his life and work – from all over the world. countries, in the Commonwealth and around the world.

“His sense of service, his intellectual curiosity and his ability to have fun in any situation were all overwhelming.

“That mischievous and questioning twinkle was as brilliant at the end as when I first laid eyes on it.”