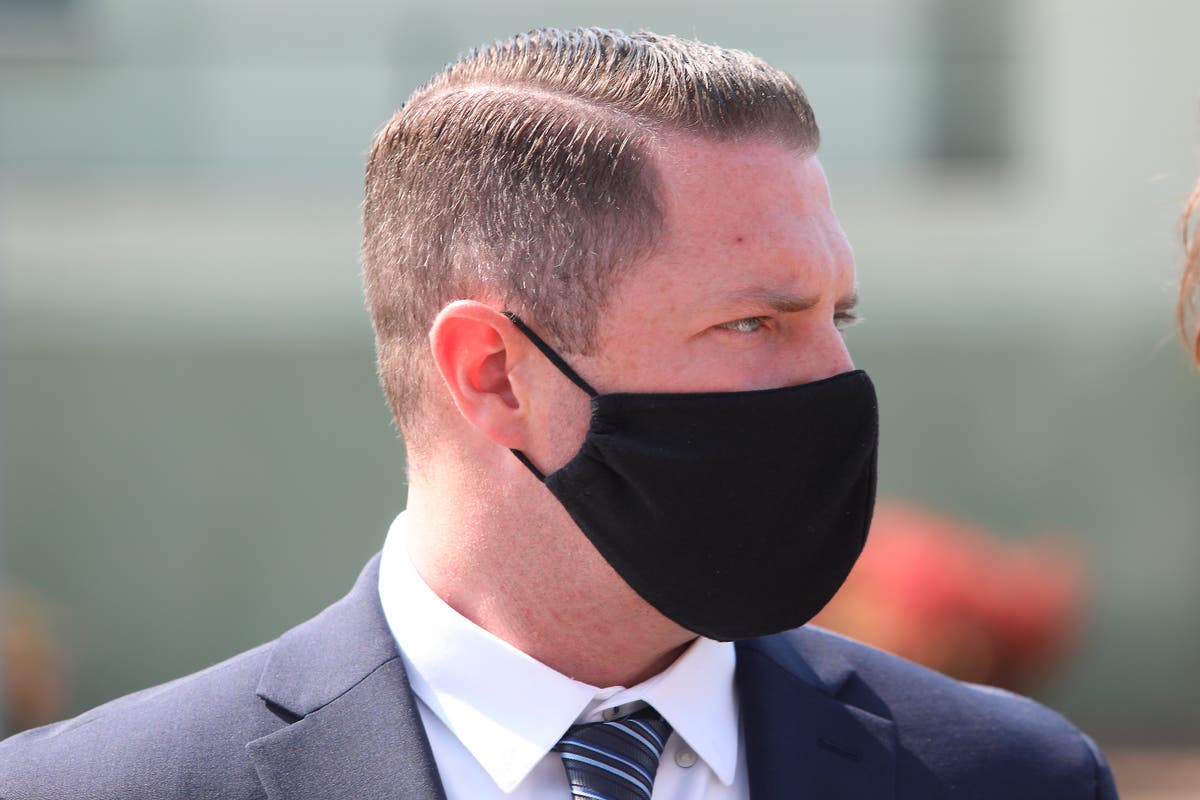 To receive free real-time news alerts straight to your inbox, sign up for our news emails

A former cop already jailed for a fatal shooting in an affluent San Francisco suburb will not face criminal charges in a second murder, that of a homeless black man who demanded the officer stop him. kill in a 30-second confrontation, a prosecutor said Friday.

Contra Costa District Attorney Diana Becton said she would not seek to try former Danville officer Andrew Hall in the death of Tyrell Wilson, who was holding a knife at the time of their confrontation in March 2021.

Hall is already serving a six-year prison sentence in the fatal 2018 shooting of 32-year-old Laudemer Arboleda during a low-speed police chase. Hall was convicted last year of assault with a firearm for shooting at Arboleda’s vehicle as it drove past. Arboleda, who was unarmed and mentally ill, was hit by nine bullets as he walked away from the police.

Becton said she did not have proof beyond a reasonable doubt that Hall, 33, acted unlawfully when he killed Wilson last year as he responded to reports of someone throwing stones from a viaduct on a highway.

She called it a “difficult and challenging case” and that she and her legal team “spent a lot of time and resources weighing the evidence before coming to this conclusion.”

“As a community, we must find ways to defuse encounters with law enforcement where the use of force leads to tragic results,” she said in a statement. “The loss of Tyrell Wilson’s life weighs heavily on our community and I extend my deepest condolences to the Wilson family.”

Hall’s attorney, Mike Rains, praised Becton for “what appears to be a very long, serious and thoughtful look at the facts” which he said ultimately revealed “a tragic situation” where Hall had to defend himself from a man approaching with a knife.

“Deputy Hall tried to avoid the need to use lethal force” by repeatedly telling Wilson to drop the blade, Rains said in a statement.

“I understand the times we live in and I commend (Becton) for standing up to that pressure and making the right decision,” Rains said.

If she had charged Hall more quickly in the previous shooting, “it never would have happened,” said John Burris, an attorney for Wilson’s family. “This young man would not have been killed.”

Critics also questioned whether race played a role: Hall is white, Wilson is black, and Arboleda is Filipino. Danville is a town of multi-million dollar homes and predominantly white residents.

Video taken by a nearby motorist showed Hall standing a few feet away and facing Wilson before the officer appeared to walk towards Wilson, as Wilson appeared to back away. Video from the motorist does not appear to show Wilson making any sudden movements toward Hall.

Becton’s office said that before the shooting, Wilson told Hall not to touch him, then pulled a folding knife from his jacket and held it by his right thigh, the blade pointing forward. He took five steps away from Hall saying twice, “Touch me and see what happens.”

Hall drew his gun and pointed it at Wilson, telling him to drop the knife three times. Wilson then took two to three steps towards Hall, raised the knife to his chest, rolled his eyes and said, “Kill me,” according to the report from Becton’s office.

Hall took about three steps back and shot Wilson once in the head, shooting just 32 seconds after he first spoke to Wilson. Wilson died in hospital two days later.

Police previously released still photographs showing Wilson holding a bag in his left hand and a folding knife in his right hand.

A juror could reasonably conclude that Hall was in imminent danger, particularly if Wilson was “potentially engaged in ‘suicide by a cop,'” Becton’s report concluded.

Burris said that in his opinion “there was enough evidence to warrant a prosecution here.”

Wilson suffered from schizophrenia, and Burris said he was obviously mentally retarded when Hall approached him.

“That should have been a clue at the time that something was up with this young man,” Burris said.

“But the officer did not back down or reassess. He got very aggressive,” Burris said. “The officer created this confrontation.”

He said the family could ask the state attorney general or U.S. attorney to review the case, noting that California law requires that killings by police be not only reasonable, but necessary. Wilson’s death doesn’t seem necessary, given the circumstances, Burris said.

Becton charged Hall with manslaughter and assault in Arboleda’s death a month after he shot Wilson, but a jury deadlocked on the manslaughter count while convicting him of assault. fact.

Hall is serving his six-year sentence at nearby San Quentin State Prison.

The Contra Costa Sheriff’s Office is providing police officers to Danville under contract, and the county has paid more than $9 million to the families of the two slain men to settle civil rights lawsuits. The sheriff’s office had cleared Hall of misconduct in Arboleda’s death after its own nine-month investigation.