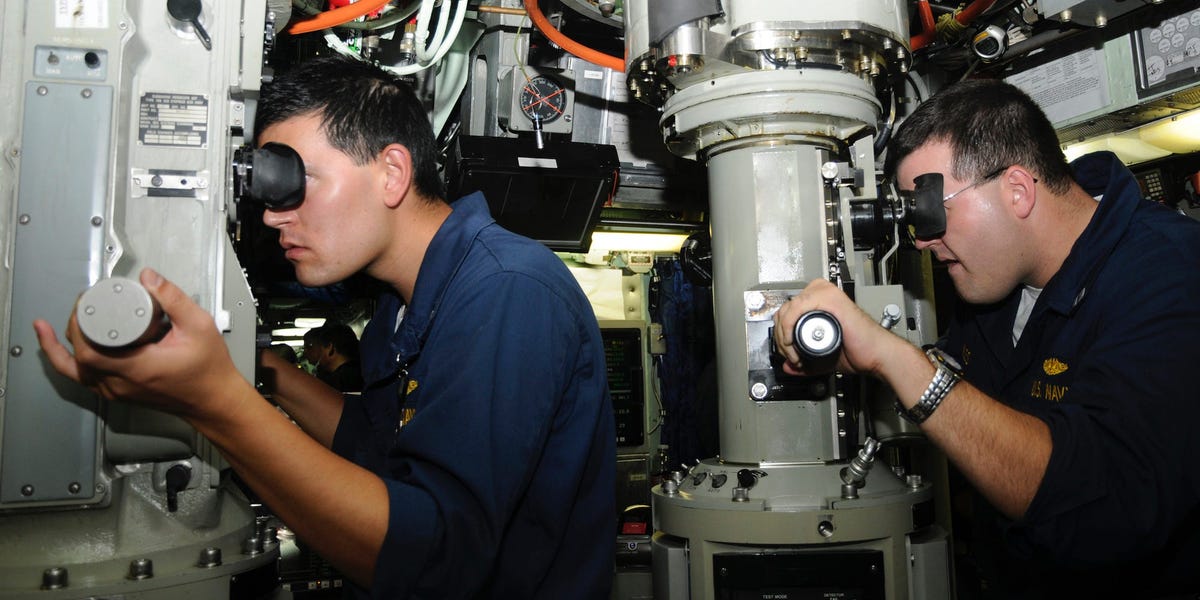 Few parts of a submarine are as iconic as the periscope.

For over a century, periscopes have been sub-commanders’ window to the outside world, allowing them to check their surroundings, find targets, and assess their attacks.

But this fundamental characteristic of the submarine world may soon be a relic.

The US and UK are both commissioning submarines equipped with new photonic and optronic masts that completely replace the periscope while ensuring that submariners can still see their targets on the surface.

Lenses, mirrors and prisms are replaced by sensors, cameras and optical fibers, and this improves the design of submarines.

Traditional periscopes have a vital function, but they are bulky and take up a lot of space in the already cramped interior of a submarine.

To be effective, the periscope well must run the entire height of a submarine. This limits how the submarine’s sail – the tower-like structure above the submarines – and the compartments below can be arranged, as they must have room for the massive metal pylon that holds them. crosses.

It also requires the submarine’s control room to be on a smaller upper deck towards the sail, instead of a larger deck below.

In addition, only one person can look through a periscope at a time. This prevents other crew members from having a full view of their targets or surroundings, and could cause delays when other people take turns looking through the periscope.

Finally, because the periscope penetrates well into the hull of a submarine, the damage to it – whether due to a collision with another ship or even extremely rough seas – can be very costly and take a long time to repair, not to mention potentially fatal.

The US Navy and the Royal Navy believe they have found the solution to such problems with their new nuclear-powered attack submarines, classified SSN.

The US Navy’s newest SSN is the Virginia class. Instead of traditional periscopes, the Virginia-class boats were America’s first submarines with photonic masts.

Each boat has two AN / BVS-1 photonic masts. Rather than lowering the entire hull, the masts are integrated into the sail and extend and retract like a telescope, meaning the control room can be placed on a second lower deck, where there is more room. .

Each mast has three cameras: infrared, high resolution and color. These cameras are connected to the TV screens in the control room via fiber optic cables.

The masts, each of which can be rotated 360 degrees, are also equipped with a laser rangefinder, allowing the crew to accurately plot distances for targeting and navigation.

Until 2018, the crew of every Virginia-class submarine operated the masts with a joystick system developed by Lockheed Martin.

But the joystick was unwieldy for many young sailors, who described them as “clumsy” and “really heavy”.

The Navy’s solution? Xbox 360 controllers, which are much more intuitive for sailors who grew up playing video games. Controllers were also better for the budget. Lockheed Martin’s joystick costs around $ 38,000, while an Xbox 360 controller costs as little as $ 30.

The first Virginia-class boat to benefit from the controller upgrade was the USS Colorado, which entered service in 2018.

The Smart class is the largest and most advanced attack submarine ever built for the Royal Navy.

With the commissioning of the first ship, the HMS Astute, in 2010, the Royal Navy also switched from optical periscopes to cameras.

Like the AN / BVS-1, the CM10 masts are equipped with infrared, color and high resolution cameras connected to the control room screens by optical fiber.

In addition to telescoping into the sail instead of going through the hull, the masts are fully stabilized, allowing them to be used in rough seas. The CM10 also has a laser rangefinder.

Thales is developing a new generation of optronic masts with the introduction of the discrete variant. The LPV is equipped with new sensors and cameras and integrates “Digital Crew”, which Thales describes as “a feature of artificial intelligence and automation”.

Digital Crew will assist with detection and tracking and will be able to highlight, categorize and track multiple onscreen targets in real time, faster than a single human operator.