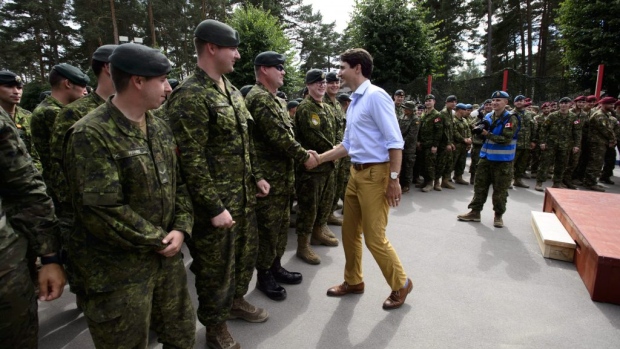 OTTAWA — Latvia is keeping its fingers crossed to be next after Prime Minister Justin Trudeau announced this week that Canada is extending and expanding its military mission in Ukraine in response to concerns about Russia.

In an interview, Latvian Ambassador to Canada Karlis Eihenbaums said his compatriots are grateful for the 600 Canadian troops currently deployed in the Baltic state to defend against the threat of a Russian attack.

Canadians form the backbone and lead a 1,000-man NATO battle group that includes soldiers from nine other alliance nations. The battlegroup is one of four such units across Eastern Europe first created in 2017 to counter Russia.

But Eihenbaums said his government hopes the Canadian government will extend the mission beyond its current end date of March 2023 – and that Canada and other NATO members will add more forces to the mix.

“We hope this will continue because the Canadians are doing a great job,” he said, adding in reference to both Russia and its ally Belarus, which also borders Latvia: “It’s a signal extremely important now for our neighbours”.

Much of the current standoff between Russia and NATO has revolved around Moscow’s demand that Ukraine never be allowed to be part of the transatlantic military alliance, which includes Canada, the United States and 28 European countries.

Yet the Kremlin has also asked NATO to withdraw all its forces from the territory of member states that once belonged to the Soviet Union, a list that includes Latvia. The alliance rejected the request, raising fears of another war in Europe.

It is in this context that Trudeau announced a three-year extension of Canada’s training mission in Ukraine and 60 additional trainers to the current contingent of 200 soldiers. Canada also provides non-lethal equipment, intelligence and cyber aid.

NATO members are also in talks on boosting the alliance’s presence across Eastern Europe as an additional deterrent to war, with some allies such as France and Denmark having already announced additional commitments over the past week.

Trudeau spoke Thursday with Latvian Prime Minister Krišjānis Kariņš who thanked Canada for contributing troops to the battle group and leading it. A summary from Trudeau’s office said Kariņš also welcomed Canada’s decision on the mission to Ukraine.

Still, although the summary didn’t mention any requests for additional troops in Latvia, Eihenbaums said the two men discussed “how to improve” the battlegroup in Latvia. He added that Defense Minister Anita Anand was due to visit the country in the coming weeks.

Latvia’s longtime foreign minister made no secret this week that his government believes NATO should strengthen its presence in the region.

“We are reaching the point where the continued military build-up of Russia and Belarus in Europe must be addressed by appropriate NATO countermeasures,” Edgars Rinkevics wrote on social media.

“It is time to increase the presence of allied forces on the eastern flank of the alliance as both a defensive and deterrent measure.”

The current battlegroup is designed for conventional warfare, that is, combat with an army similar to that of Russia. Although Canada’s contribution is primarily infantry with armored vehicles, other partners have contributed tanks, artillery and other equipment.

Similar battlegroups led by Britain, Germany and the United States were established in Estonia, Lithuania and Poland respectively.

Some have expressed concern that adding more NATO troops to the alliance’s border with Russia will only heighten tensions at a time when cooler tempers must prevail.

While he obviously doesn’t want war, Eihenbaums argued that the best way to deal with Russia was to show resolve by bolstering the alliance’s presence in his country and elsewhere in the region.

“Russians are basically like in a boxing ring,” he said. “They understand when you are strong. And you have to be strong. If we are able to send additional (troops), that will be appreciated and welcome.”

Asked earlier this month if the government would repatriate Canadian troops from Latvia and Ukraine if Russia attacked, Prime Minister Justin Trudeau said Canada was in Latvia to defend the country and other members of the NATO against Russian incursions.

Eihenbaums noted that the battle group is designed to fight if necessary, adding: “There are sometimes questions about, ‘If there is something, will they fight? Of course, they will go to fight. It’s not about all that.

This report from The Canadian Press was first published on January 29, 2022.