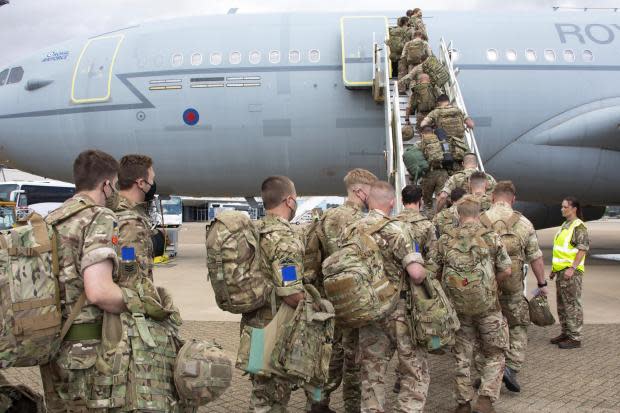 British Army troops have taken off from Brize Norton in Oxfordshire in one of the biggest deployments to Eastern Europe since the Cold War.

Faced with the Russian-Ukrainian war, around 8,000 British troops will be sent to Eastern Europe between April and June, and dozens of tanks will be deployed in countries from Finland to North Macedonia this summer.

British personnel will join NATO allies and the Joint Expeditionary Force alliance, which includes Finland and Sweden, for the drills in what Defense Secretary Ben Wallace called a ‘show of solidarity and solidarity force” against Russian aggression.

Brize Norton is the largest RAF station in the UK. It provides fast international flights to UK operations and exercises internationally and supports UK home defence.

“These exercises will see our troops join forces with NATO and Joint Expeditionary Force allies and partners in a show of solidarity and strength in one of the largest shared deployments since the Cold War.”

The Ministry of Defense (MoD) said the action had been planned for a long time, but had been stepped up since Russia invaded Ukraine in late February.

Field Army Commander Lieutenant General Ralph Wooddisse said: “The UK is making a significant contribution to the defense of Europe and the deterrence of Russian aggression.

“The British Army’s series of exercises are fundamental to both.”

Do you have a story for us? Send us your news and photos here

Register an event for free on our site here