UK troops surge as Iraq simmers: Hundreds of British troops to be sent to Iraq in new NATO mission

By Mark Nicol, Defense Editor for the Daily Mail

Hundreds of British soldiers will be sent to Iraq in the biggest increase in British troops since the last Gulf War.

The decision is expected to double or even triple the current numbers later this year.

A total of 179 British soldiers lost their lives in Iraq after its invasion in March 2003 until the official cessation of Operation Telic eight years later.

The last British combat troops withdrew in May 2011 at the end of the controversial campaign.

Currently, 100 British personnel are stationed there to train Iraqi security forces. As part of a new NATO mission, they could also be used in a security role – which could bring them into direct conflict with militia groups.

Last night’s announcement by Defense Secretary Ben Wallace came days after a rocket attack on a US base in northern Iraq killed a civilian contractor and injured nine others.

According to defense sources, NATO plans to increase its troops in Iraq from 400 to 5,000. 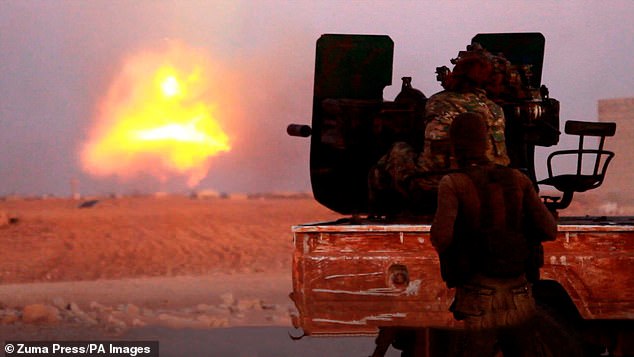 As part of a new NATO mission, they could also be used in a security role – which could bring them into direct conflict with militia groups. ISIS is seen above in Syria in 2017

Supporting the decision, former army commander Colonel Richard Kemp said: “Iraqi forces are facing a growing threat from the Islamic State, with a double suicide bombing in Baghdad in January and daily attacks Across the country.”

Colonel Kemp said the rise of IS had “led to many terrorist attacks in Europe, including in the UK”.

He added: “We and NATO must do everything we can to help the Iraqis improve their military capabilities so that they can impose greater control over their territory.” In doing so, our forces will also protect us here at home.

NATO Mission Iraq provides training and advice to the Iraqi government and security forces in a non-combat mission.