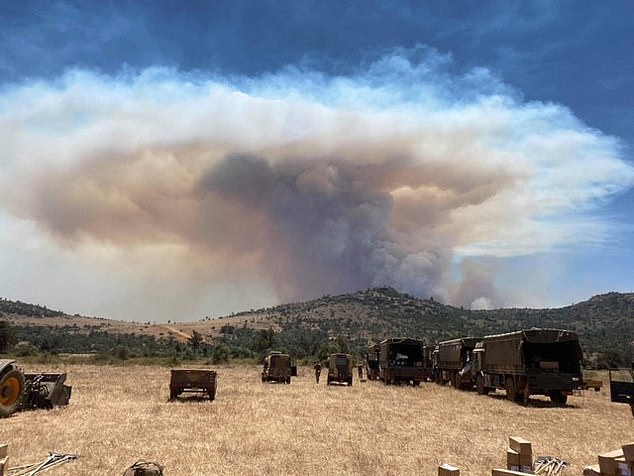 By Mark Nicol Defense Editor for the Daily Mail

Five elephants, including a calf, were reportedly killed in fires started by British soldiers in Kenya, prompting a British military investigation.

Authorities confirmed the investigation last night as the most recent of the fires continued to rage over 8,000 acres of the Lolldaiga training area.

All military exercises have been suspended as an emergency operation to extinguish the massive fire continues.

Hundreds of British soldiers are deployed to fight the blaze, pushing back the flames on the dry scrubland.

Last night, British and Kenyan army helicopters poured hundreds of tons of water on the blaze. British military vehicles were on standby to evacuate people living nearby.

Four adult elephants are believed to have perished in the flames on Wednesday evening. They were trapped inside an area surrounded by electric fences, which had been erected to prevent them from wandering into the area where British troops are waging war, according to local reports.

Defense chiefs are investigating the cause of the blaze, which is believed to have started on Wednesday when soldiers preparing a meal on a camping stove accidentally lit a light on dry grass.

A baby elephant was reportedly killed in another fire at a military training area in Kenya last week. 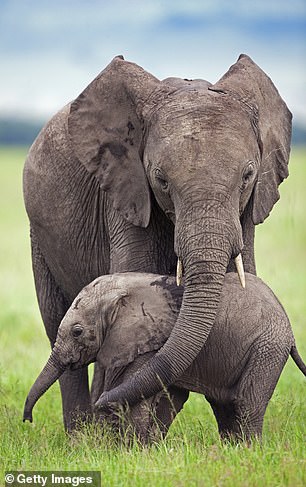 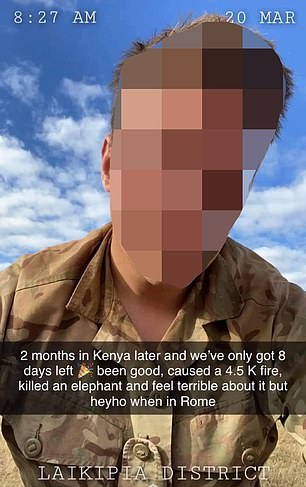 Five elephants, including a calf, (left: file photo) were reportedly killed in fires started by British soldiers in Kenya, prompting a British military investigation. A soldier posted a message on Snapchat (right) which allegedly referred to the hell of the past week rather than the fire that is still burning.

In this incident, Royal Military Police officers apparently set off a rocket in an attempt to disperse a herd of elephants. But the rocket would have lit a bush, trapping a calf.

The Defense Ministry declined to comment on the reported elephant deaths. Over 1,000 British troops are currently participating in military exercises in Kenya. Some have expressed their frustration with the fires on social media.

One soldier wrote in a message sent via social media site Snapchat: â€œTwo months later in Kenya and we only have eight days left. I have been wise, I caused a fire, killed an elephant and I feel bad about it, but hey, when in Rome. This post is believed to refer to the hell of the past week rather than the fire that is still burning.

The Defense Ministry said last night: “We can confirm that there was a fire during a UK-led exercise in Kenya and that investigations are ongoing.

â€œAll staff have been identified and our priority is now to urgently help the local community if it has been affected. We are putting our resources to contain the fire and are working closely with the Kenyan authorities to manage the situation.

“The exercise has been put on hold while the conditions on the ground can be fully assessed.” It comes as the two African elephant species were classified yesterday for the first time as endangered, according to a “red list” of animals at risk established by the International Union for the Conservation of Nature.

Most of the British troops operating in Kenya are from the 2nd Battalion, the Mercian Regiment (2 Mercs). Army chiefs announced last week that it would be removed as part of the government’s integrated defense and security review.

There are 230 servicemen permanently based in Kenya to train visiting British troops and Kenyan forces. Most are part of the British Army Training Unit Kenya (BATUK).