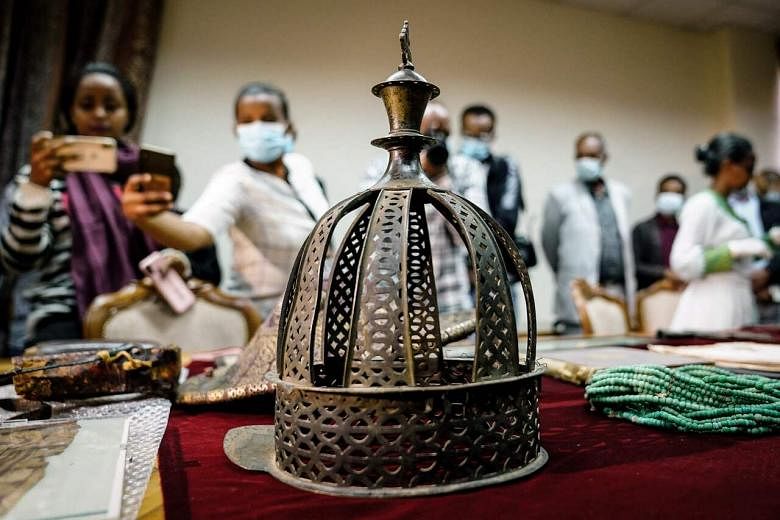 ADDIS ABABA (AFP) – Ethiopia on Saturday welcomed the return of precious objects looted by British soldiers more than 150 years ago, after a long campaign for their return.

The collection – collected in Britain, Belgium and the Netherlands – includes a ceremonial crown, an imperial shield, a set of silver-stamped horn goblets, a handwritten prayer book, crosses and a necklace.

Most of the items were looted by the British Army after defeating Emperor Tewodros II in the Battle of Magdala in 1868 in what was then Abyssinia.

The treasures were unboxed in front of the media at the National Museum of Ethiopia on Saturday, more than two months after they were officially handed over in a ceremony in London in September.

Ethiopia said it was the largest repatriation of such artifacts to the country, with its Ambassador to Britain Teferi Melesse describing it as “of enormous importance”.

There have long been calls in Africa for Western countries to return their colonial booty, with many precious national treasures kept abroad in museums or sometimes in private collections.

Earlier this month, the West African state of Benin hosted nearly 30 royal treasures seized during France’s reign over 130 years ago.

The Ethiopian government is still fighting for Britain to return other stolen items, including sacred wooden and stone tabots or tablets, which depict the Ark of the Covenant.

The tabots are kept in the British Museum in London – which has a vast treasure trove of foreign treasures – but have never been on display to the public.

Ethiopia is also looking for the remains of Tewodros’ son Prince Alemayehu, who was taken to Britain after the emperor’s suicide following his defeat on the battlefield.

“A variety of artifacts which are a legacy of our culture and values â€‹â€‹were looted during the battle and illegally taken out of the country,” Tourism Minister Nasise Challi said.

“Countless of our artifacts are in various museums, research centers and in the hands of individuals,” she said at Saturday’s event, calling for their return.