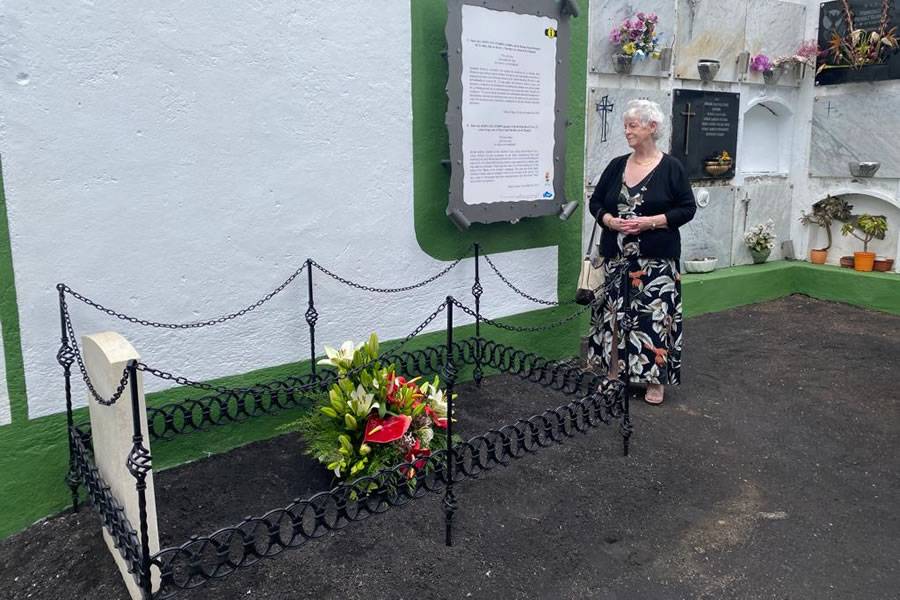 It’s been 79 years since the mutilated and lifeless body of British soldier John Lee washed up on a La Palma beach during World War II, and last week he was finally reunited with family members after a historian traced his routes, and elderly relatives had to wait for the lifting of Covid restrictions before they could visit his grave, which is in the corner of the municipal cemetery of Villa de Mazo.

As the Second World War ravaged the planet, John Lee, 22, of Glasgow, gave his life in the fight against the enemy, and since 1943 his remains have lain in a corner of the municipal cemetery, a corner which has been British property since 1951, having been acquired for 100 pesetas.

Over the years the headstone has been preserved by the British government and the people of Villa de Mazo have taken pride in the folk history and mystery surrounding John Lees.


Archive image of John Lees and his family

Several tributes have also been paid to the soldier, including one in 2018 for the 75th anniversary of the appearance of the soldier’s body, in the presence of the UK’s ambassador to Spain at the time, Simon Manley, as well as the consul British Charmaine Arbouin, and Vice Consul Helen Díaz de Arcaya Keating.

Villa de Mazo Mayor Goretti Pérez Corujo said, “John Lee ended up being part of the history of Villa de Mazo, becoming one of the well-known and beloved tenants of the San Blas Cemetery. The way he appeared on the beach, mutilated, caused even greater grief to the people of our commune. It is truly touching and beautiful that since then her grave is always surrounded by flowers.

Hearing the story and wanting to know more, historian Óscar Fumero, decided to dig deeper and unravel the historical keys to the days before the soldier’s death, saying that “Convoy SL 125, in which John was part, was intercepted by German U-boats west of the Canary Islands. These were days of agony and despair and many lives were lost.” But for the researcher “something was missing”. He needed to know more than the soldier’s name and number. He wanted to put a face to John, find out what ship he was on, and meet his family, so he kept looking.

He has contacted the British government who have been helping to find the soldier’s family but it won’t be easy as the surname Lee is very common. “It took hours, days, months of searching until I found a forum for fallen soldiers and then the family gravestone that John’s father had erected in his memory.”

In addition to the soldier’s data, there were the dates of death of his parents, Martha and Henry, and that of his sister Agnes, who died when she was only 16 years old. “I brought this to Consul Charmaine Arbouin’s attention, and from there everything was easier,” Fumero said. And finally, last Friday the 13the May 2022, the long-awaited reunion took place after 79 years.

John Lee’s niece Mary Hastie, now 80, and other relatives made the emotional trip to La Palma to be the first of her direct descendants to visit his grave since his burial in 1943.

Historic moments like this serve to remember, honor and thank those who have sacrificed so much on our behalf. Some parents weren’t lucky enough to bury their sons or have them nearby to bring flowers to their graves, but in this case the people of Villa de Mazo took care of that.

According to Mary, her grandmother told her when she was very young that she had tried to come to La Palma to visit his grave, but it was not possible. However, last Friday John finally received flowers from his own family and felt a little closer to home.