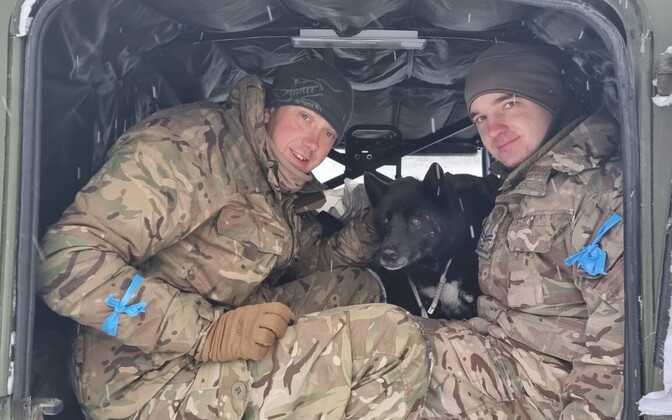 British Army personnel had cleared an area prior to the training activity to be held there as part of the ongoing large-scale Winter Camp exercise, and noticed an unidentified object in the process, later realizing it was a dog.

Although alive, the dog, which the soldiers called “Socks”, was very cold in the harsh conditions.

Glad to see the efforts of @British Army soldiers to return a lost dog they found on the training ground while participating in Ex WINTER CAMP.

Now reunited with his owners, we wish Socks the Dog the best! pic.twitter.com/5L9NioUtsh

It was later discovered that Socks had been missing for days and was happily reunited with its owner.

eFP captain Matt Styles said: “It was a privilege to find and locate Socks the Dog with my team today, get him to safety and reunite him with his owners.

“It was clear he had been on the training ground for some time but we are happy that his story ended well,” added captain Sykes.

After getting Socks to safety and warmth and providing food and drink, soldiers, working with local authorities, were able to locate and contact the dog’s owner.

Temperatures in the area have been well below zero even during the day recently, and snow has fallen.

Approximately 1,400 soldiers participate in the winter campan annual exercise, in the vicinity of Tapa, about 80 km southeast of Tallinn.

Infantry and armor capabilities in snowy conditions are the focus of the exercise, including interoperability between the Estonian Defense Forces (EDF) 1st Infantry Brigade and the British and French soldiers who make up the eFP.

While the Dreadnaught Squadron of the British Royal Tank Regiment currently forms the core of the eFP, in addition to personnel from all support elements of the British and French armies, as well as the EDF, members of the British elite Parachute Regiment and the Yorkshire Regiment, an infantry regiment whose 1st Battalion served with the eFP in 2018, also participate in the winter camp.

The exercise ends on Sunday.