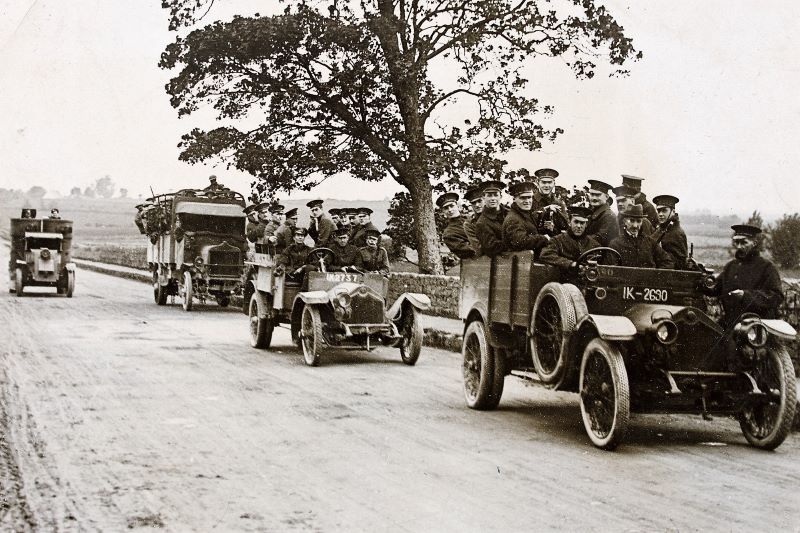 During the Irish War of Independence, over 180 British soldiers were killed in action while 103 died in accidental gunfire. 46 committed suicide and four were killed by their comrade in arms.

The first British soldier to be killed by another soldier during the Irish War of Independence was Corporal Charles Cleaver Yates.

Born in Leicestershire in 1896, Yates worked as a shoemaker before enlisting in the Royal Marines at the outbreak of World War I in 1914. In 1918 Yates was posted to HMS Coventry on the Atlantic Ocean. In June 1920, he was posted to the Ballyvaughan Coast Guard station in County Clare where he was assassinated a month later.

On July 7, 1920, Yates was shot dead by fellow Marine Cecil George Redvers Helmor. This summer morning, Police Chief James Mooney of the Ballyvaughan RIC Barracks responded to a shooting at the Coast Guard station. When he got there, he found Yates lying on his bed with blood flowing from a gunshot wound to his neck as a hysterical Helmor was held back by other Marines.

Helmor was born in Reading in 1900 and worked as a hotel porter before joining the Royal Marines in 1918. He was posted to HMS Coventry where he and Yates became close friends, but when they were posted to Ballyvaughan, the friendship has deteriorated.

An argument broke out between Helmor and Yates this July morning at the Coast Guard post, which resulted in Helmor pointing his pistol at Yates and shooting him. Yates was taken to Cork Military Hospital where he died 17 days later. Yates was buried in London Road Cemetery.

Helmor, 19, was court martialed and sentenced to death, but was commuted to penal servitude which was spent in Maidstone. The circumstances behind Helmor’s motives have been withheld from the public. Yates had made unwanted romantic advances to Helmor who responded with murder.

In 1939 Helmor was free and living in Gloucestershire. He moved around a lot and in the 1950s he moved to Nenagh Co Tipperary where he died in 1974.

Sergeant Albert Sweeney was born in Salford in 1887. Married with three children, he enlisted in the British Army in 1914. In 1919 he was posted to Portobello Barracks with the King’s Own Regiment.

Sergeant Thomas Downton was also a member of the King’s Own Regiment and was stationed at Portobello Barracks. He was born in 1890 in Worcestor and had served with the Worcestor Regiment in India. In 1919, he was deployed to Dublin.

Both Downton and Sweeney would die in Portobello Barracks at the hands of fellow soldier George Henry Pollington.

Born in Norfolk in 1892, Pollington enlisted in the British Army in 1915 and fought in the First World War. He was highly decorated but suffered from shell shock and was discharged in 1918. Pollington was cleared to re-enlist a year later and was sent to Portobello Barracks.

In Dublin, Pollington was courting a local girl called Mary Fitzpatrick. On Saturday evening September 19, 1920, Pollington ushered Mary into the Portobello barracks. During the night, the couple argued until the early hours of Sunday morning. Pollington was drinking heavily and at dawn this Sunday morning he pursued Mary in a drunken rage with a gun around the barracks. She fled into the mess hall for the safety of the other soldiers gathered there, including Sweeney and Downton.

Sweeney stepped in front of the terrified woman to protect her from Pollington who pointed his gun and fired. Sweeney was killed instantly. Downton sprang into action and attempted to take on Pollington, but he too was shot. Mary ran to an open window and got out to safety.

It took several more soldiers to hold Pollington back. He was court martialed and sentenced to death, commuted to life imprisonment. The case was briefly mentioned in the newspapers before being completely hushed up by the British authorities.

Pollington was released in 1927. He later moved and married in England where he lived until his death in 1958.

On April 14, 1921, gunner Alexander Morrison was shot down at Baldonnel airfield in Dublin. Born in England in 1901, Morrison was assassinated by fellow Bomber Soldier Sidney Ince following an argument at the airfield.

The two had been arguing for weeks over a girl. The woman in question appeared at Ince’s court martial where she claimed he harassed her during a dance and Morrison stepped in to help her. From then on, the two became enemies and often quarreled in their base in Baldonnel. As they stood guard at the airfield that spring night of 1921, the two soldiers argued. The two men drew their guns and Ince was the first to fire. Morrison was killed instantly and a panicked Ince then turned the gun on him, but his suicide attempt was unsuccessful.

At his court martial, Ince declared insanity. He was supported by his father who said madness was rampant in their family. Ince was sentenced to life imprisonment but was released a few years later and disappeared.

Gunner Morrison was buried at Seafield Cemetery in Edinburgh. He was the last British soldier to be murdered by another soldier in Ireland during the War of Independence.