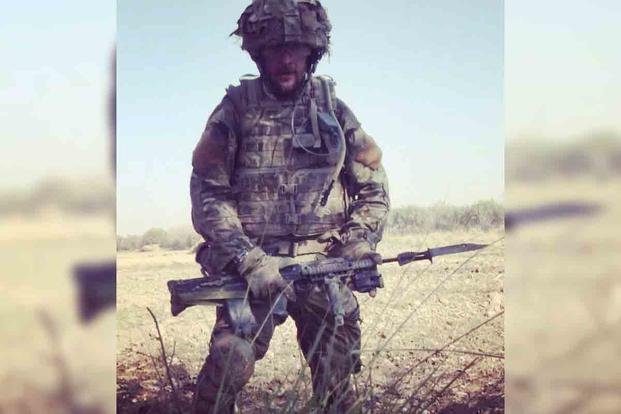 Even in the most extreme circumstances, a well-timed and well-placed bayonet charge can turn the tide of a battle.

American troops captured the fortifications of Stony Point from the British using only bayonets during the Revolutionary War. The outcome of the Battle of Gettysburg could have been decided with the bayonet charge of Little Round Top. World War II and the Korean War saw their share of bayonet charges prevail.

While it was common to hear stories of soldiers fixing bayonets back in the day, it might be surprising to hear of a bayonet charge in Afghanistan using modern SA80 semi-automatic rifles.

Cpl. Sean Jones was leading a patrol of members of the 1st Battalion, The Princess of Wales’s Royal Regiment, through Karakan, a village in Afghanistan’s Helmand province in October 2011. Their mission was to lure out a team of Taliban insurgents who were responsible for construction and placement of improvised explosive devices (IEDs).

As the unit moved through an open field, they crossed a ditch on their way back to a checkpoint. As Jones emerged from the ditch, the Taliban laid their trap. When the shooting started, he threw himself to the ground.

The British soldiers were caught in a kill zone with fire from three directions. They hid in the nearby ditch, but Taliban fighters closed in even as they returned fire.

“We had to react quickly” Jones said in a statement of the UK Ministry of Defence. “There was something different about it. It was obviously a well-planned ambush and they initially overwhelmed us with fire from three points.”

To unbalance the ambush, British soldiers fired a rocket at one of the enemy positions. Jones then ordered three of his soldiers to fix the bayonets. The four went over the ditch as the troops still in the ditch with their platoon commander provided suppressive fire.

They charged across 260 feet of open field, towards the village, as it was pulverized by enemy fire. The charge caught the Taliban fighters off guard and one of the enemy positions began to fall back. The others were still firing on the British troops who remained in the ditch.

Jones launched a second assault on another enemy-held position. What began as a carefully planned ambush turned into a decisive rout for the Taliban. The rest of the platoon was soon able to rejoin Jones’ detachment.

For his daring bayonet charge, Jones received the Military Cross, Britain’s third highest honor for gallantry in combat, from Prince Charles. According to his Military Cross citation, British troops in Karakan were under heavy fire for 29 minutes.

This deployment was Jones’ third to Afghanistan. He previously complained of severe nightmares and other telltale symptoms of post-traumatic stress disorder, leading to a diagnosis of the condition in 2009.

The diagnosis caused controversy in the UK in 2017, when he revealed the Ministry of Defense knew he had PTSD but did not disclose his condition to him. They even deployed him again to Afghanistan in 2011, when they were aware of his mental state.

Jones spoke about the situation when he discovered his hidden diagnosis. As a recipient of the Military Cross, he is one of the UK’s most prominent veterans and has become a mental health advocate, speaking publicly about his anger issues, nightmares, flashbacks and of his excessive alcohol consumption. follow him on Twitter.

— Blake Stilwell can be reached at [email protected] It can also be found on Twitter @blakestilwell Where on Facebook.

Whether you’re considering joining the military, researching post-military careers, or keeping up with military life and benefits, Military.com has you covered. Subscribe to Military.com to receive military news, updates and resources straight to your inbox.

© Copyright 2022 Military.com. All rights reserved. This material may not be published, broadcast, rewritten or redistributed.