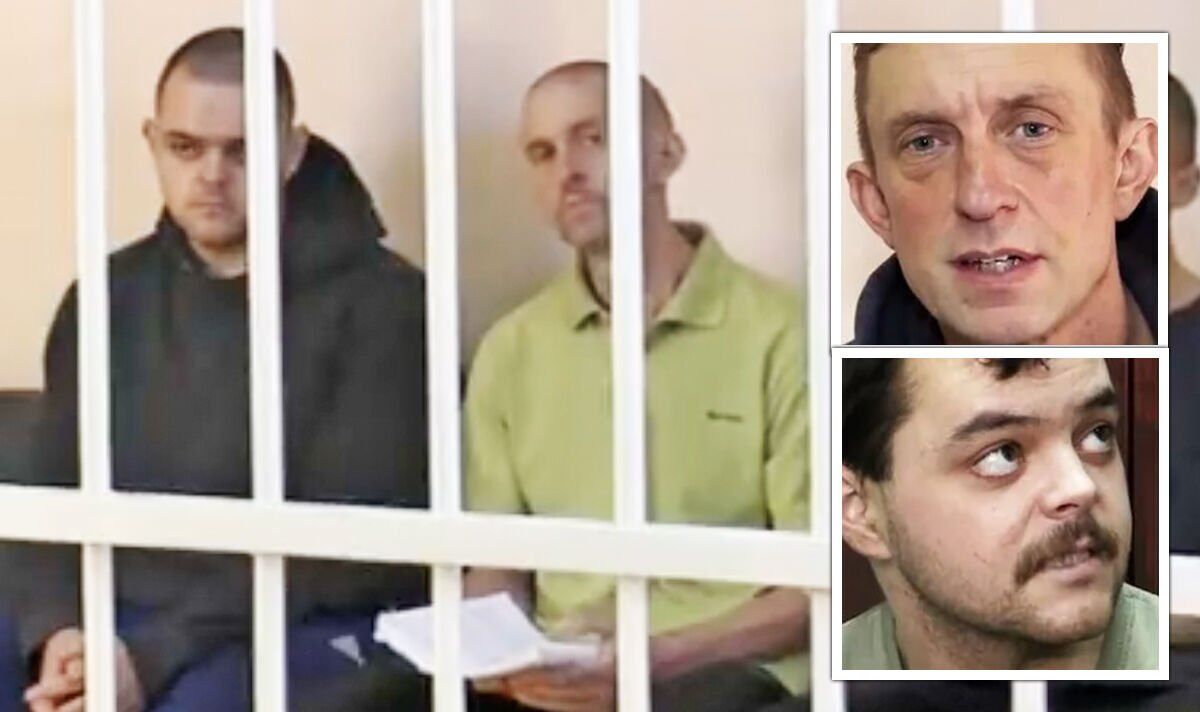 The two Britons, arrested in April during the Battle of Mariupol, have been charged with being foreign mercenaries, attempting to seize power and with terrorist offences. They had both been in the country since 2018 and insist they served legitimately in the Ukrainian army – so they should be protected as prisoners of war by the Geneva Convention. The UK has made it clear that they are prisoners of war with immunity and should not be prosecuted for taking part in hostilities. Deputy Prime Minister Dominic Raab said on Monday the British government expected “the law of armed conflict to be represented” and that the Foreign Office would make “all representations”. The court, in one of Ukraine’s breakaway regions, is not internationally recognised.

Russian news agency RIA Novosti said on Telegram: “The Supreme Court of the DPR issued the first sentence against mercenaries – Britons Aiden Aslin and Sean Pinner and Moroccan Saadun Brahim were sentenced to death, reports the correspondent of RIA Novosti from the courtroom.”

The Interfax news agency said the three men were on trial for “mercenarism” and activities “aimed at seizing power and overthrowing the constitutional order” of Donetsk.

The President of the Donetsk People’s Republic, Denis Pushilin, accused the three men of “monstrous” crimes.

Mr. Aslin, Mr. Pinner and Mr. Brahim appeared in court for the first time on Wednesday and, according to RIA, pleaded guilty to acts aimed at seizing power by force.

Alexander Nikulin, the chairman of the panel of judges who handed down the death sentence, called the sentence fair.

He said the court was guided by “not only the prescribed norms and rules, but the main and inviolable principle of justice”, Interfax reported.

Other pro-Russian officials claimed that the actions of the three soldiers had “resulted in civilian deaths and injuries, as well as damage to civil and social infrastructure”.

A pro-Kremlin official in Donetsk said that although the men pleaded guilty, they were sentenced to death because of the “main and unshakable principle – justice”.

Tass news agency quoted a lawyer acting on behalf of the defendants as saying the three “wish” to appeal the conviction.

The head of the judicial council said the convicts could appeal the decision within a month and, if an appeal was accepted, they could be sentenced to life imprisonment or 25 years instead of the death penalty.

Mr Raab said the UK government intended to file a protest in the criminal case against Mr Aslin.

Foreign Secretary Liz Truss, who originally sparked controversy when she said it was normal for British soldiers to go overseas to fight before returning, said: “I totally condemn the sentencing of Aiden Aslin and Shaun Pinner held by Russian proxies in eastern Ukraine.

“They are prisoners of war. This is a fictitious judgment without any legitimacy.”

Writing on Twitter, she added: “My thoughts are with the families. We continue to do all we can to support them.”

The family of Mr Aslin, a former care home worker, said on Tuesday it was a ‘very sensitive and emotional time’ and that they were working with the Ukrainian government and the UK Foreign Office to try to free him.

They said in a statement: “Aiden is a much loved man and we miss him very much, and we hope he will be released very soon.”

An undated family photo of Shaun Pinner, one of the convicted British soldiers (Picture: PA)

The 28-year-old joined the Ukrainian Armed Forces as a Marine in 2018. He had also fought with Kurdish armed units in Syria against the so-called Islamic State.

Committed to marrying a Ukrainian, he had applied for Ukrainian nationality.

On Wednesday, after the sentencing, they said: “We have heard the news from Donetsk and need time to digest everything.

“We love Aiden with all our hearts. He and Shaun, as members of the Ukrainian Armed Forces, should be treated with respect like any other POW.

“They are not and never have been mercenaries.

“We hope that this conviction will be overturned and implore the governments of the UK and Ukraine to do everything in their power to ensure that they are returned to us safely, and soon. We can only imagine what they’re going through right now.

“This is a very upsetting development and we ask that our privacy be respected at this time.”

DO NOT MISS
The two scenarios in which NATO could declare war on Russia [EXPLAINER]
Putin’s religion: Does the Russian president believe in God? [ANALYSIS]
Russia’s ‘Five Hands’ Could Trigger Nuclear Armageddon [INSIGHT]

What’s going on where you live? Find out by adding your postal code or visit InYourArea

He was filmed in April saying he had been captured defending Mariupol, his adopted city.

His family stressed at the time that he was “not a volunteer or a mercenary, but officially in the service of the Ukrainian army”.

They added: “Shaun has enjoyed the Ukrainian way of life and has considered Ukraine his adopted home for the past four years.

“During this time he met his Ukrainian wife who is very focused on the humanitarian needs of the country.

“Shaun is a funny, much-loved and well-meaning husband, son, father, brother and friend.”

According to Mr Pinner’s family, his three-year contract with the Ukrainian army was due to expire at the end of the year and he planned to play a humanitarian role in the country.

As well as serving with the Royal Anglian Regiment, Mr Pinner, originally from Watford, Bedfordshire, had served in the British Army for nine years and was previously a waste management worker.

‘It is only right that war crimes should be recorded,’ says Lord Dannatt

Observers called the handling of the men’s cases a “show trial” intended to mimic the war crimes trials against Russian soldiers in Kyiv.

Speaking on BBC Radio 4’s World At One, he said: “This disgusting Soviet-era show trial is the latest reminder of the depravity of Putin’s regime.

“The Russian Ambassador should be summoned to the Foreign Office to report on this flagrant violation of the Geneva Convention.

“Nobody should think they can treat British citizens like that and get away with it.”

Ukraine has sentenced three Russian soldiers to prison terms for war crimes related to a war that is close to reaching the four-month mark.

Vadim Shishimarin, 21, was sentenced to life in prison on May 23 for killing a 62-year-old civilian in the Sumy region of northeastern Ukraine shortly after the conflict began.

Alexander Bobikin and Alexander Ivanov were each sentenced to more than 11 years in prison on May 31 for bombing settlements which “violated the laws and customs of war”.

The court that sentenced Mr. Aslin, Mr. Pinner and Mr. Brahim is in Donetsk, one of the parts that make up Donbass.

Pro-Moscow separatists declared it the “Donetsk People’s Republic” in 2014.

The other part forming the region, which the Kremlin recognized on the eve of the start of the full-scale invasion of Ukraine, is Lugansk.

Russian forces have focused their efforts on this area in recent months.

A Number 10 spokesperson said: “We are obviously deeply concerned about this. We have continuously said that prisoners of war should not be exploited for political purposes.

“You will know that under the Geneva Convention, prisoners of war are entitled to combatant immunity and should not be prosecuted for participation in hostilities.

“We will therefore continue to work with the Ukrainian authorities to try to secure the release of all British nationals who were serving in the Ukrainian Armed Forces and who are being held as prisoners of war.”