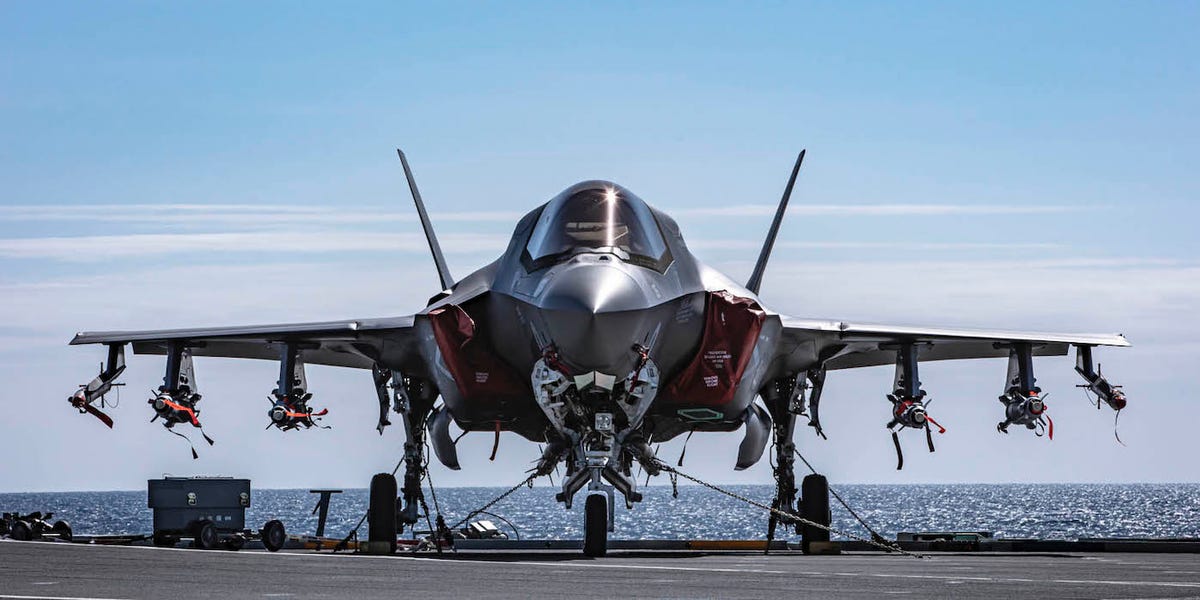 The Royal Navy posted on Twitter on October 23, 2019, an image of the F-35 in “beast mode”, loaded during testing of the highly automated weapons handling system with six (two of them internal) Paveway IV dual-mode GPS/ INS and laser-guided bombs, two AIM-132 ASRAAM (Advanced Short-Range Air-to-Air Missile) on the wing tips and two AIM-120 AMRAAM (Advanced Medium-Range Air-to-Air Missile) in the weapon bays.

The Paveway IV, the latest iteration of the widely used GBU-12 Paveway II developed for the UK with additional GPS guidance, and the ASRAAM, the UK replacement for the AIM-9 Sidewinder, were specially integrated on the F-35 for the Royal Air Force. and the Royal Navy, since they do not operate the GBU-12/EGBU-12 and AIM-9X fielded by the USMC on their F-35Bs.

The Meteor BVRAAM is also expected to be integrated into the aircraft, as the Royal Air Force recently declared operational, and will eventually replace the AMRAAM in the next few years.

Britain’s F-35B Lightnings are currently deployed aboard the aircraft carrier HMS Queen Elizabeth for operational testing, while the ship cruises the Westlant19 Carrier Strike Group off the east coast of the United States.

As the author wrote in a previous article, this deployment is to test personnel and aircraft to ensure they are compatible with the carrier.

One of the main features of the ship that are tested is the highly automated weapons handling system, a system derived from commercial automated warehouse processes that moves palletized ammunition from deep magazine and weapons preparation areas to hangars. and the cockpit using automated tracks. and elevators.

One of the great benefits of the HAWHS is the reduction in manpower needed to handle ammunition, reducing the risk to the crew during one of the most dangerous activities aboard ship; the crew is now only required to handle the weapons during initial storage and preparation for use on the aircraft.

Over the next few days, the F-35s will fly from the deck of HMS Queen Elizabeth with various weapon loadout configurations, including “Beast Mode”, to continue operational testing.

Here’s what our editor David Cenciotti wrote about this setup in a previous post:

“In fact, unlike a ‘First Day of War’ loadout, in which the F-35 would carry weapons internally to maintain low cross-section and radar observability, the ‘Third Day of War’ configuration should be used at from the third day of an air campaign when, theoretically, enemy air defense assets (including sensors, air defense missile and gun systems and enemy aircraft) have been degraded by air strikes (conducted also by F-35s in “stealth mode”) and the battlespace has become more permissive: in such a scenario, the F-35 no longer relies on low observability for survivability, so that “it can transition to carrying large external loads. These conditions are not always met. For example, LO was not required when the F-35A was called in to carry out the first airstrike in the Middle East, nor when the US Marine Corps F-35B carried out the first airstrike in Afghanistan.”

The same day the ship also saw the arrival of the other two British F-35s to be deployed to Westlant19.

USMC F-35Bs are expected to deploy to HMS Queen Elizabeth in the following days to conduct trials before a joint operational deployment with RAF/RN F-35s in 2021.