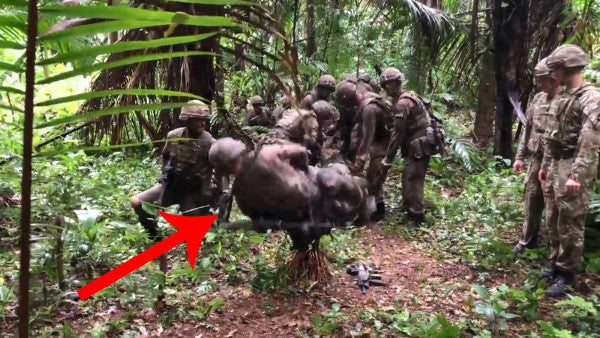 British Grenadier Guard soldiers have shared a video on Twitter showing the excruciating consequences of not having adequate knowledge of the battlefield during training.

In the video, a group of soldiers equipped with SA80 rifles are seen carrying a troop on a stretcher during a mock casualty evacuation, when one of the soldiers inadvertently steps into a sharp broken branch protruding from the ground.

A groan can be heard as onlookers, including soldiers providing security, look towards the soldier, who falls backwards.

Maintaining your 360 degree knowledge of the battlefield is essential in the jungle… you never know what it has in store for you next. pic.twitter.com/xltrDsPJyA

“Maintaining your 360 degree battlefield awareness is essential in the jungle,” the Guard said in the tweet. “You never know what he has in store for you next.”

the Grenadier Guards‘ dates back to 1656, and it is one of the oldest regiments in the British Army.

Guard soldiers have participated in all of the country’s major wars, including the current fighting in Afghanistan. In addition to conventional combat capabilities, the Guard says it uses unconventional equipment, such as quad bikes, to mobilize quickly.