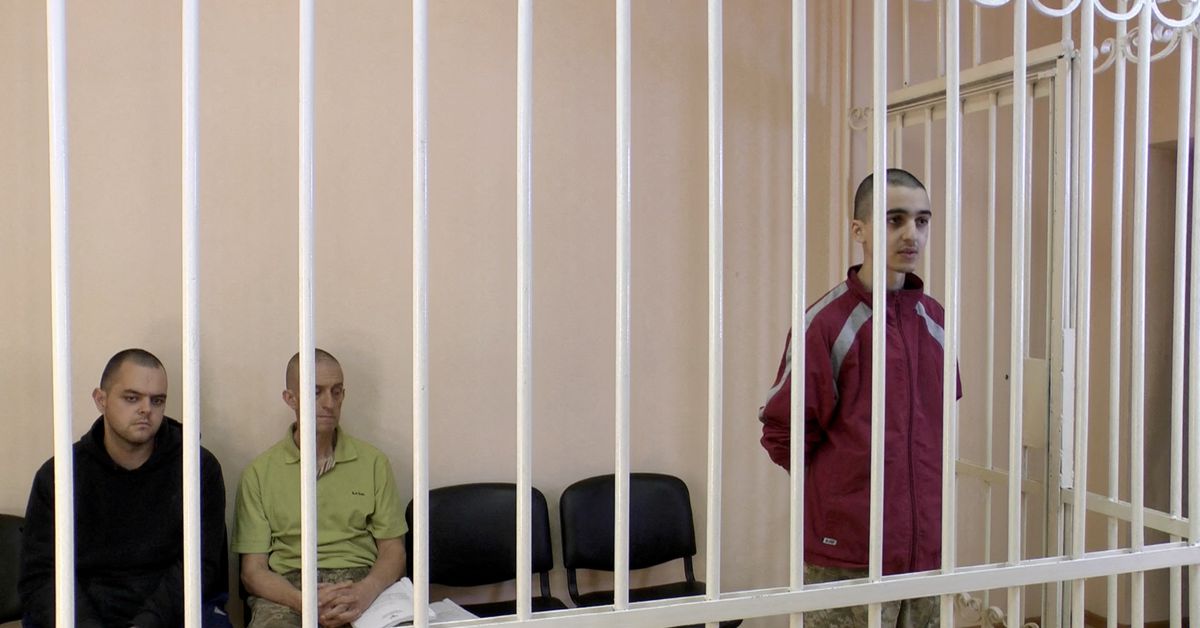 LONDON, June 10 (Reuters) – Britain on Friday condemned Russian proxy authorities in the Donbass for what it called a “flagrant breach” of the Geneva Convention by sentencing to death two British nationals captured in the separatist region as they fought for Ukraine.

Prime Minister Boris Johnson’s spokesman said he was speaking to Ukraine rather than Russia about Aiden Aslin and Shaun Pinner, who were found guilty of ‘mercenary activities’ by a court in the Self-proclaimed Donetsk People’s Republic (DPR).

Aslin’s family said he and Pinner “are not and have never been mercenaries”.

They were living in Ukraine when war broke out and “as members of the Ukrainian Armed Forces they should be treated with respect like any other POW,” the family said in a statement.

A UN official said trials under such circumstances amounted to war crimes, while Ukrainian Foreign Minister Dmytro Kuleba condemned what he called a “show trial against prisoners of war”.

Johnson’s spokesman said Britain’s priority was to work with Kyiv to secure the soldiers’ release quickly.

When asked if Britain would talk to Russia, he replied: “We don’t have regular interaction with the Russians.”

British Foreign Secretary Liz Truss, who spoke with Kuleba on Friday, called the sentencing a “flagrant breach of the Geneva Convention”. Read more

The Russian Foreign Ministry said Britain’s reaction to such condemnations was “often hysterical” and that it should appeal to self-proclaimed authorities in the DPR.

Britain does not recognize the DPR. The Ukrainian government has no control over the eastern parts held by the separatists.

Russia has deployed massive firepower there to extend the reach of the separatists as part of its invasion of Ukraine, which it calls a “special military operation”. Read more

Russian Foreign Minister Sergei Lavrov said the two Britons and Brahim Saadoun, a Moroccan also on death row, had committed crimes on the territory of the self-declared separatist state.

Among UN member states, only Russia recognizes the entire Ukrainian province of Donetsk, much of which remains under Ukrainian control, as the independent DPR. The territory is internationally recognized as part of Ukraine.

A senior Ukrainian official said Russia wanted to use the foreigners as hostages to pressure the West over peace talks. Read more

France said it was “extremely concerned” about the death sentences following what it called a “show trial”.

“According to the Chief Command of Ukraine, all the men were part of the Ukrainian Armed Forces – and if so, they should not be considered mercenaries,” he told reporters.