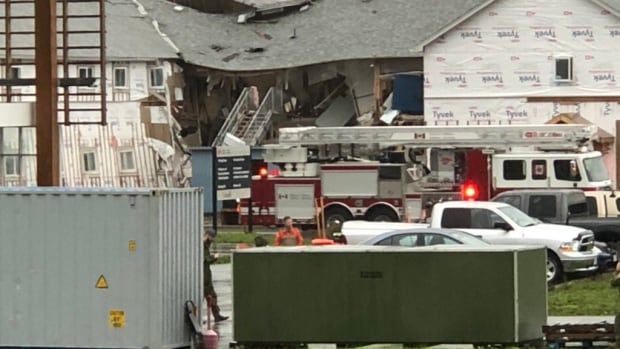 Emergency services say 10 people were injured, including one seriously, at Canadian Forces Base Comox in what the military called a “large” explosion.

The explosion occurred around 9 a.m. Pacific time in an unused barracks building, according to base spokesperson Captain Brad Little.

According to BC Emergency Health Services (BCEHS), several ambulances, including an air ambulance carrying an intensive care team, were dispatched to the scene around 9:15 a.m. PT.

In a statement to CBC, BCEHS said six patients had been treated at the military base medical unit and three had been taken to hospital in stable condition.

A critically ill patient was airlifted to hospital with the intensive care team, said BCEHS, which operates the British Columbia Ambulance Service.

My thoughts are with the personnel injured today in the gas explosion at 19 Wing Comox. #NEWS # 19wingcomox

Military officials have yet to say what caused the explosion.

Little said he was in his office across the street when the explosion happened and it was powerful enough to collapse into part of the ceiling of the office building.

He said the explosion occurred some distance from where the planes are at the base and that there was no damage to the planes or to the airfield facilities.

He said military officials would provide more details at a later briefing, but did not specify when that would be.

“Right now, we are focused on helping our wounded servicemen,” Juilliet said.